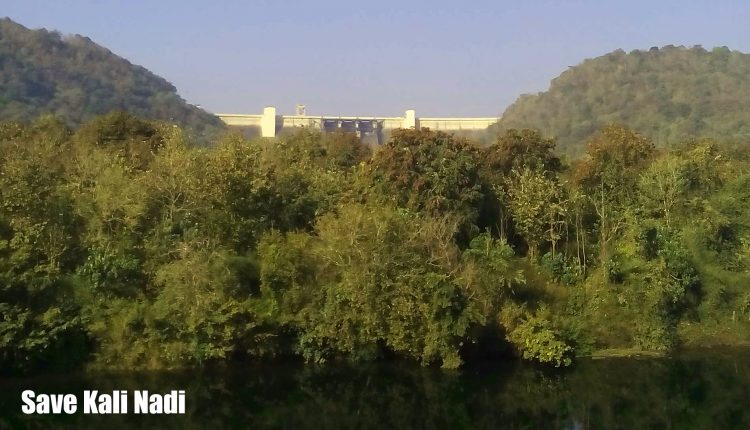 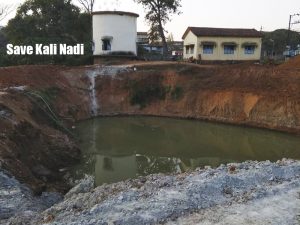 The Kali river is the lifeline of the people of Uttara Kannada district. A dam built at Supa (GaneshGudi) holds the back waters and produces hydro-electricity. Kali river is fed by five tributaries and dams have been built on the river downstream where hydro-electricity is produced.  The river originates in Uttara Kannda (U.K.) district and flows 184 kms from its place of origin at Diggi in Joida taluk and joins the Arabian sea at Karwar in the same district.

The jack well work to install a 15,000 horse power (HP) motor has resumed under the protection of the police. And for blasting purposes gelatine has been used on the river bank; gelatine is an explosive substance and the chemicals after blasting have been discarded in the river without considering the environmental damage caused to the Kali river? The debris after the gelatine blasting has been dumped in the river polluting the water bodies and threatening the aquatic creatures including the crocodiles, which are in a sizeable number along the banks of the river.

The work being done is illegal and hence the public has been raising concerns but it seems to be falling on deaf ears.

There is a school and a residential area in the vicinity of the jack well to be installed. It will also cause severe noise pollution in the area thereby affecting the residents.

The genuine concerns of the people in Saving Kali River

The water from Kali nadi (river) will be diverted by huge pipes of 1-2 metres in diameter through the 15,000 HP jack well to be installed in old Dandeli via Haliyal road to Alnavar in Dharwad district.

The waters of the river are being given to neighbouring districts through unscientific ways causing severe drinking water crisis to the people of Ram Nagar, Joida, Dandeli, Haliyal and also affect the power generating capacity on the many dams built across the river downstream.

The people of Ram Nagar, Joida, Dandeli, Haliyal  believe that the river first belongs to the people of Uttara Kannada (U.K) district. The drinking water crisis in the district must first be addressed before diverting the water to neighbouring districts in the state.

In  Janata colony, Bailpar, Alur, Kogilbana areas surrounding Dandeli and many other places are facing severe drinking water crisis, and their problems not being heard and their protests falling on deaf ears.

Many villages in Joida taluk are in pathetic condition and lack potable drinking water and for their daily activities.

An individual from Ram Nagar added that, “water is supplied though tankers in the summer months and the concerned officials are aware but doing nothing to help them”.

If river Kali’s water is supplied to other districts, then tourism and other industries dependent on the river for their daily needs will be adversely affected. The families who earn their bread and living from the river’s natural resource will be shattered and unemployment will rise and affect the social fabric of society.

An emergency meeting was called by Dandeli city corporation and decided that the waters of river Kali must not be supplied to other districts while the people from Ram Nagar, Joida, Dandeli and adjoining areas continue to suffer. The DC, District-in-Charge Minister, local authorities, elected representatives have been informed and asked them to stop the work.

Many welfare groups and organisations have come to the forefront and fighting against the illegal activity being carried in old Dandeli area. The fight to Save Kali Nadi has been continuing and many leaders from different political parties; social welfare groups; organisations; individuals and members of different Samiti’s; concerned citizens; environmentalists and people from the affected areas have voiced their concern and there has been massive public participation to Save Kali Nadi.