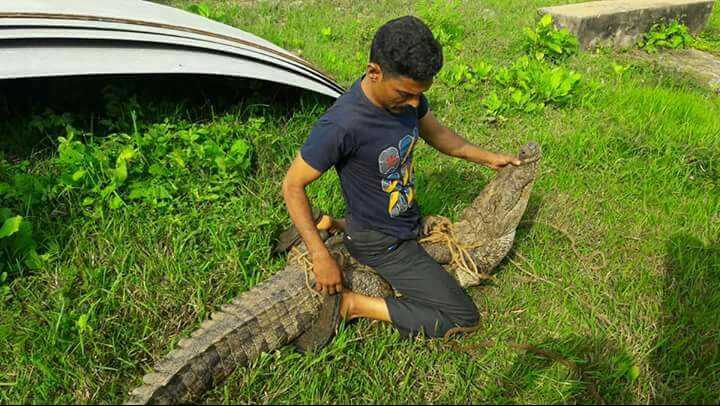 Dandeli in Uttara Kannada (U.K) district of Karnataka is a name hard to miss in the tourist circuit of the state and in southern region of the country. The traveller comes searching for adventure and is guaranteed the same. Dandeli nestled in the western ghats and river Kali originating and reaching the sea in the same district is a rarity. The river has lots to offer in terms of adventure and the tourists demands and needs are fulfilled by the tour operators and the large number of home stays and resorts in the vicinity of Dandeli.

As the majority of the land in UK district is covered by forests and teeming with flora, fauna and also the crawling and slithering varieties. Reptiles like monitor lizards, snakes and crocodiles also coexist with other fauna in good numbers. The area is home to venomous, semi-venomous and non-venomous snakes and the tourist should take care of himself and his family and friends accompanying him and should not step in unfamiliar terrain. For one may never know what’s lurking in the shadows or camouflaged beneath? Some of the snakes found in the vicinity of Dandeli are Russell’s Viper, Spectacled cobra/King cobra, common krait and saw scaled vipers.

And even if one were to encounter snakes there is help at hand; a resident of Dandeli, has made a name for himself and the city by catching them, filming, and educating the people and safely releasing them in the wild where they rightfully belong. ‘Razak Shah Snake Rescuer’ is a popular name loved and respected by all; he has his own  YouTube channel with the same name above. He captures, rescues and releases a large varieties of reptiles, birds and all fauna. Razak’s knowledge of wildlife and topography of the area is excellent. He’ was previously associated in the tourism industry and later quit, he’s now working as a security guard with West Coast Paper Mill (WCPM) since the last 15 years. He’s a call away if he’s not working and subject to the shift he’s working on.

Razak  learnt to catch snakes at an young age from his close relatives at home when he was in high school and  has studied up to PUC IInd  year. He’s now in his mid 40s, has been attending calls since last 20 years and has two  assistants,  and residing at Gautan, Dandeli. He has also caught crocodiles till date and they ranging in size from six feet, he’s caught an eight footer six years back; a four foot one two years back; a small two footer at WCPM and also a 12 foot long crocodile.

Razak follows all precautions while catching snakes, it includes wearing hand gloves as it saves from the bite (but one cannot feel the vibrations). He uses a hook, bag, basket and has a bag with ring which is khaki in colour. During normal times he catches anywhere between 15-20 snakes each month and less number of snakes caught during Covid and lockdown period. Razak’s knowledge of snakes is in depth and he can identify each one of them, till date he’s known to have caught 20,000 snakes in the last 20 years. He classifies them as venomous, non-venomous and semi-venomous snakes.

He’s had a fatal snake bite in December 2020 by a Russell’s viper and suggests that one should reach hospital within an hour of the bite. He does social service and when he catches crocodiles, he spends money from his pocket and transports the reptile in his jeep and leaves it in the river. He’s also involved in creating awareness and training people, and has conducted classes at resorts, organisations and has taught people how to handle snakes.

*Razak Shah is social media savvy and one can see his videos on YouTube.