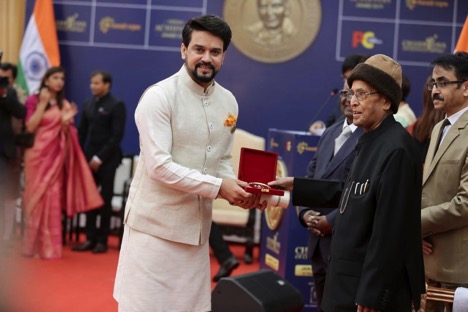 New Delhi: Minister of State for Finance and Corporate Affairs Anurag Singh Thakur has been awarded with ‘Champions of Change 2019’ award by Former President of India Mr. Pranab Mukherjee at an event organized at 10 Rajaji Marg and later followed by Vigyan Bhawan, New Delhi on 20 January 2020.

Anurag Singh Thakur has been bestowed with this award for his significant contribution towards social welfare, particularly in the field of Healthcare, Education and Sports. He is the only Union Minister in Narendra Modi Government to receive the award this year.

The nominations were evaluated and shortlisted by an eminent jury headed by Justice K.G. Balakrishnan (Former Justice of India & Former Chairman NHRC) and Justice Gyan Sudha Misra (Former Judge Supreme Court of India). Among the set of awardees selected for this honor across India included Chief Minister of Uttarakhand; Chief Minister of Jharkhand; Deputy Chief Minister of Delhi; Acharya Balkrishna, Chairman Patanjali Ayuved, actor Shilpa Shetty and many other prominent personalities. Among the Union Minister, Government of India, Anurag Singh Thakur was the only Union Minister to receive the award this year.

Anurag Singh Thakur is currently the Minister of State for Finance and Corporate Affairs in Modi 2.0 Government and is a popular face amongst youth. He has been actively working in his Parliamentary Constituency on pertinent issues of Healthcare, Education, Sports and Women Empowerment and in this space has created models that are being replicated across the country.

“All the social initiatives undertaken in my Parliamentary have been initiated keeping in mind the principle of Antyodaya. The overarching objective of each initiative be it healthcare, education, sports or women empowerment has been to ensure that the last person in the queue also gets empowered.”

“I firmly believe that access to quality healthcare and education is the right of every individual, regardless of the economical background. Apart from this Sports helps in shaping personalities and building character of an individual and thus promotion of sports as a culture is a key significance. I am glad that through the range of initiatives undertaken have successfully impacted the lives of the beneficiaries and will continue to do so in future too.”

One of the most talked about movement in the healthcare sector is Asptal – a movement to provide free primary medical service in the remotest of the location in Himachal Pradesh. The free service has been catered to 1,89,554 beneficiaries within a span of less than two years. This model is being appreciated across the length and breadth of the country and many Member of Parliaments and Member of the Legislative Assembly have come forward to execute the same in their areas.

Similarly Sports witnessed one of the most engaging campaigns called Khel Mahakumbh as a part of which 42,700 youth participated across five sports disciplines. The underlying objective of the campaign was to promote the culture of sports and curb youth from falling prey to drugs by keeping them constructively engaged.

In the field of Education an interesting way of learning was introduced by taking meritorious students to different parts of the country and experience different aspects that they wouldn’t have access to otherwise. Students, teachers and families of the children involved appreciated this initiative extensively since the exposure given to the students during the tour was unparalleled.

The ‘Champions of Change’ Awards is organized by the Interactive Forum on Indian Economy (IFIE), which is Government of India recognized Non-For-Profit Company and its prestigious new magazine Power Corridors and Panchayati Times.