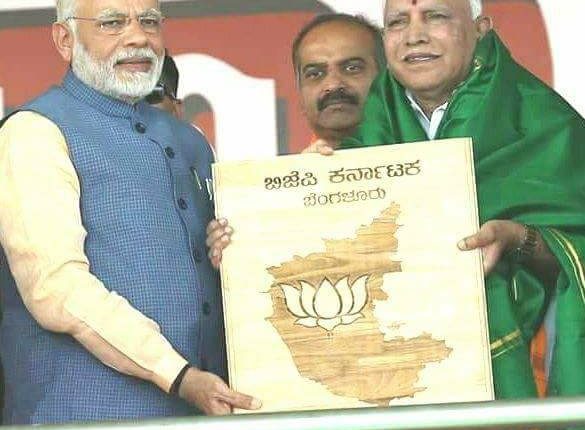 The BJP in July this week completes one full year in office in Karnataka after the Congress-JD (S) alliance lost power after the BJP swept the polls in the 2019 general elections. The internal contradictions amongst the alliance partners finally ended and the state now has a single party rule under the BJP for political stability. The comeback leader of the BJP, B. S. Yediyurappa (BSY), took charge as the Chief Minister for the fourth time and immediately thereafter the state faced the worst monsoons in its history in August last year.  Political conversations in the saffron party within the state and in the central party office post 2006 are complete only after taking Yediyurappa’s name. BSY  has the credentials to the high office as he’s a mass leader; who has fought, won  and lost many a political battles; has a knack for political survival and belongs to one of the dominant communities in the state.

The Wounded Leader: BSY took over as the Chief Minister for the second time in 2008 and lasted three years in office till 2011. During his tenure he faced rebellion and had to douse the fires as the party was split into many factions and he had to make peace with the trouble makers through central mediation. He fought pitched internal battles and had to prove his writ every other day and finally demitted office in July 2011. He made way for D. V. Sadanand Gowda who lasted one year as the Chief Minister; he too was changed and was succeeded by Jagdish Shettar for the remainder of the term. The state saw three CMs in five years.

Post 2011, after being forcefully ejected out of his chair BSY was never the same again; he tried his best to come back as the CM, but his efforts were stalled by the party and he never was a happy man again. He later formed the KJP and damaged the BJP’s prospects; the state saw the Congress party coming to power with a majority under Siddaramaiah’s leadership in the assembly elections that year in 2013.

The Comeback Leader: After damaging the BJP, BSY reinvented his politics by batting for Narendra Modi as the Prime Minister in the run up to the 2014 Lok Sabha elections, and merged his party with the old party and was back in the game again. The BJP won convincingly and BSY became a Lok Sabha MP from 2014-18. As a MP, he cemented his position as the party’s only reliable face along with PM Modi’s wide appeal and emerged as the chief ministerial face. In the 2018 assembly elections, the BJP emerged as the single largest party and won 104 seats but fell short of a simple majority. BSY quickly took oath in spite of not having the required numbers and had to exit unceremoniously. The BJP once again swept the Lok Sabha polls in 2019 and won 25 of the 28 seats and the results weakened the Congress-JD(S) alliance. The political fortunes of BSY changed once again and he made a comeback as the Chief Minister for the fourth time in July 2019.

Some MLAs from the Congress joined the BJP and after a long legal battle and elections to the seats, the BJP finally secured a comfortable majority in the assembly.

Handling The Covid-19 Crisis: BS Yediyurappa has never had a quiet day in office and the country witnessed the largest lockdown and he took the necessary steps in containing the pandemic during the early days. His governance was also praised across political circles, but the state has now emerged as the fourth most affected in the country.

The Mass Leader: The Karnataka Bhavan located at Kautilya Marg, Chanakyapuri area of New Delhi is the states’ official place visited by the elected representatives, media, officials and the people from the state. In its vicinity lie other state bhavans, and in the by lanes nearby, hotels and shops cater to the visitors.  A conversation this author was privy during BS Yediyurappa’s term  as the Chief Minister between 2008-11: a shop keeper with no knowledge of Karnataka, said that, “business booms when Yediyurappa ji visits Karnataka Bhavan, and after he resigned in 2011, the crowds from the state visiting the nearby shops reduced drastically. And he further added that Yediyurappa ji  was the most popular leader from Karnataka and did not know who succeeded him later as the Chief Minister”.