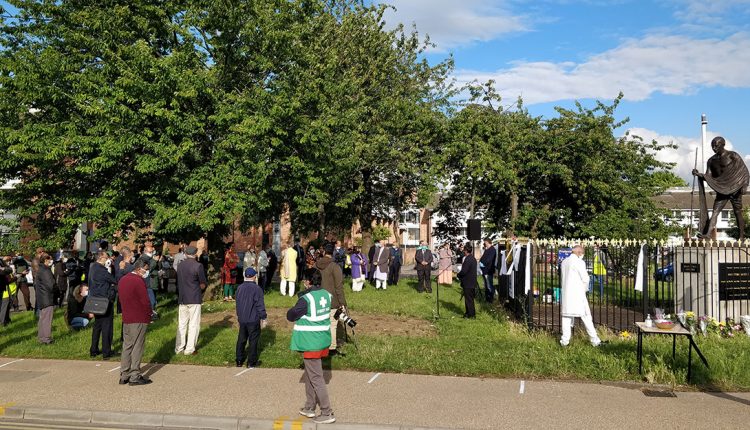 On 19th June, Friday evening at 18:30, about 200 people gathered at the statue of Mahatma Gandhi on Belgrave Road, Leicester (United Kingdom) to attend the Pushpanjali event and  show solidarity with the apostle of peace and non-violence through a peaceful event and offering flowers at the feet of the statue of Bapuji.

The event organised by Leicester branch of INSIGHT UK, a non-political grassroots organisation spread across the country, supporting and promoting the British Hindu & Indian voice, was in response to an online petition started, calling on Leicester City Council to have the statue removed.

The statue of Mahatma Gandhiji was erected in Leicester in 2009 to celebrate the principles the iconic figurehead represented.  The “Pushpanjali” meaning offering of flowers as a sign of love and respect was commenced by Shantilal Sodha, a resident of Leicester who came dressed as Gandhiji, with his signature stick.

INSIGHT LEICESTER spokesperson Darsheet Chauhan welcomed all the attendees including local and national politicians, local organisations, businesses and of course members of the public. The role of INSIGHT UK was presented as a grassroots organisation raising the Hindu voice. The British Hindu & Indian community of Leicester and in the UK play a significant role whether it be paying tax, business, education or community work. There has however been a noticeable movement of anti-Hindu and anti-India sentiment being openly manifested by some party’s political motions, the media or petitions like the one to have Mahatma Gandhiji’s statue removed. INSIGHT UK is raising the voice for British Hindu and Indian community to ask our country to value our contributions and recognise that we are an integral part of British Society and this negative and harmful behaviour must stop.

Jitubhai Acharya, Secretary of Samanvaya Parivaar, who commissioned, funded and brought the statue to Leicester described the statue as a vision of HH Swami Satyamitranand Giriji Maharaj, to bring peace and harmony to Leicester. The statue was erected with the full support of Leicester City Council.  Baroness Verma delivered a powerful message saying that we all need to stand together in the face of racism and passionately spoke about the values Mahatmaji represents.

A message from the City Mayor Sir Peter Soulsby was read out as he was unable to attend the event. The letter, which was addressed to Keith Vaz, Sir Peter Soulsby confirmed Leicester City Council has no intention to remove the statue and that the statue is here to stay. This news was received with cheers from the crowd.

Prabhudasji Shikotra from Hindu Swayamsevak Sangh (UK) delivered a poignant message about the need for unity and that Gandhiji took people on the journey of independence with him.

Cllr Hemant Rae Bhatia (Labour Party) of the Beaumont Leys ward in Leicester mentioned how Mahatmaji stood as an inspiration for other global leaders including Nelson Mandela. Cllr Rashmikant Joshi, representing the Brahma Samaj delivered a message in Gujarati celebrating the life journey of Gandhi and invited people to come and learn more about the leader rather than issue slanderous messages.

Bhupen Dave, ex-councillor (Conservative Party), spoke emotively about how the statue of Mahatma Gandhi is a valuable part of Leicester’s cultural and historical heritage and shows the value for the British Hindu and Indian heritage as part of the community of Leicester.

Bhartiben Acharya, Secretary of Shree Sanatan Mandir Leicester explained how Gandhiji was not only a Hindu figurehead but he worked for the good of all humans and inspired many more across the globe. He has set a valuable legacy for us to follow. Harish Raja of the Vishwa Hindu Parishad (UK) spoke animatedly of Bapu’s life and the values he stood for which are a valuable and unique part of modern-day global history.

The penultimate speaker, Keith Vaz, ex-MP of Leicester East and the longest served British Asian MP, celebrated Gandhiji’s statue as an important part of the identity of Leicester and welcomed Sir Peter’s message. He also advocated for the area around the statue to be named Mahatma Gandhi square. The crowd applauded this message.

Everyone echoed the sentiments of #IStandWithGandhiji #LeicesterStandsWithGandhiji & #UKStandsWithGandhiji. The event ended peacefully at 19:30 with a beautiful tapestry of flowers at the feet of the statue. The organisers mentioned that since the Pushpanjali event has been organised they are overwhelmed with continuous inflow of supportive messages on social media and emails.  The organisers expressed thanks to the attendees including all the speakers who represented so many of our key stakeholders, the police, the media and the people who were not able to attend due to Covid-19 but expressed their support through emails, messages and phone calls.