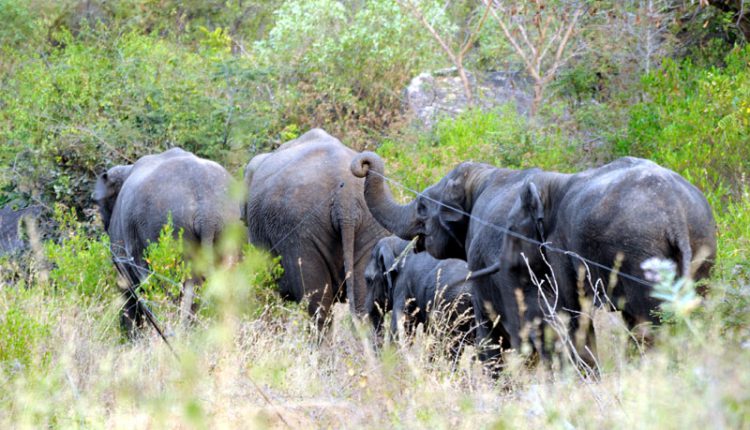 Elephant corridors have received lots of conservation attention in recent years, following fragmentation of contiguous habitat into islands. An elephant corridor, by definition, is a linear landscape that connects two or more patches of viable elephant habitats that were connected in historic times.

Natural corridors are the outcomes of geomorphic factors such as steep mountains and gorges. But over the past few decades, human activities have fragmented the vast elephant ranges : for habitations, agriculture, plantations; and development activities such as mining, industry, dams, roads, railway tracks, constructions etc. In many cases, connectivity has been completely broken, in a fortunate few a narrow connectivity exists between them; allowing elephants the right of passage within their habitat range.

Elephant corridors comprise only a small portion of the total elephant range, but they are crucial for long-term survival of elephants. Elephants have a great need of resources like food and water,  that can only be met by moving in large areas traveling long distances. Today, corridors are the only way they can move about in these large areas in search of these resources. This is also crucial for gene flow between isolated populations.

Realising the importance of elephant corridors: Wildlife Trust of India (WTI), in collaboration with a team of experienced elephant researchers, forest officials of various states and other NGOs, identified at least 88 elephant corridors in India and published a report entitled “Right of Passage: Elephant corridors of India” in 2005. As per this report, about 24% of the corridors are still totally under forest cover, while the remaining 76% are under forest, agriculture, tea gardens and settlements. Though 76 % of corridors are located fully or partially outside reserve forests, the elephants manage to move between habitats through these tea estates, agriculture fields, human habitations, busy national highways, and railway tracks. This movement is largely responsible for the loss of 400-450 human lives and crops worth millions of rupees every year. This often leads to retaliatory killing of elephants as well.

Curtailing elephant movement between habitats would mean confining or restricting an elephant population to a fragmented forest. This would force elephants to repeatedly utilize the same area, leading to a rapid decline in vegetation quality and quantity. This would in turn affect the other herbivores as food becomes scarce with a decline in prey base, leading to a corresponding decline in carnivores like tigers, leopards, wild dogs and even bears. This will also increase competition between different individuals of the same species or between different species.

Additionally, there is a high possibility for herbivores and carnivores to search for food outside the reserved forests in future. This will further deteriorate human – wildlife conflict in surrounding forest areas.

Confining a species to an area would also mean genetic isolation that could eventually lead to the wiping out of the entire population through ills of inbreeding.

If unaddressed or addressed short-sightedly, these problems could lead to the collapse of the entire faunal base of the area over time.

On a smaller scale, human-elephant conflicts could be prevented by erecting electric/solar power fence, creating elephant proof trench, constructing concrete wall and other conventional guarding methods. But these will not give sustainable results. These are only short-term approach which fails to address the issue in its entirety.

Once secured, these corridors need to be notified and given legal protection by the respective states, to allow the elephants the right of passage. This today, remains the most viable option for us to save the elephants, and possibly the entire faunal composition of the areas in question.