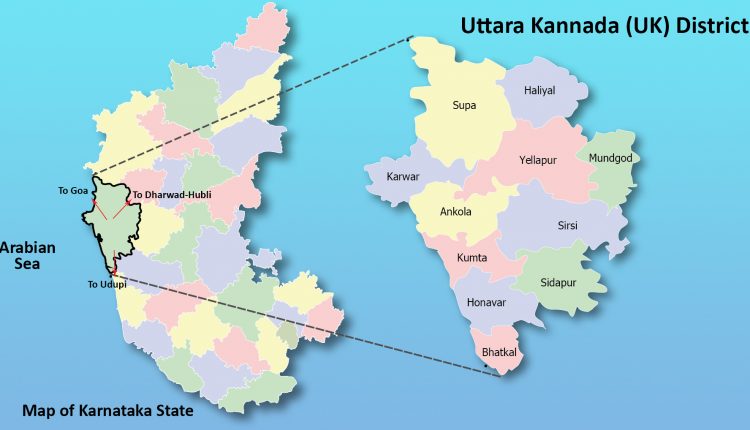 The Uttara Kannada (UK) district is strategically located in north west Karnataka, and has a total of 144 kms of coast of the total 320 kms long coastline in the state; it has a large geographical area and abundantly blessed with the bounties of nature. The (UK) district is one of the most scenic in the state and has a lot to offer in terms of flora, fauna, beaches, forests and places of pilgrimage for those seeking spiritual enlightenment and divine bliss. It has coastal, malnad and maidan agro-climatic zones which is a rarity of sorts. Let’s take the coastal taluks of the district and the starting point in the north is Karwar, touching Goa’s state border; to the south of Karwar lies the other coastal taluks of Ankola, Kumta, Honnavar and Bhatkal respectively (read in this order). The southernmost Bhatkal taluk touches Udupi district. The interior and the large taluk of Joida (Supa) shares land border with Goa, and to its east, are the taluks of Haliyal and Mundgod; the newly created taluk of Dandeli, lies between Joida and Haliyal and the central taluk of Yellapur touches the other taluks of Sirsi-Siddapur. The district has its quota of political heavy-weights and has adequate share and representation in the state administration and is home to powerful leaders belonging to different political parties.

The district has a vast talent pool of excellent human resource and the people from the district form the uninterrupted power supply (UPS) of the institutions and organisations they work by delivering best quality work, service and adding value. Their favourite place of work is the sprawling metropolis and India’s financial hub of Mumbai; the current generation of ‘techies and non techies’ are leaving their mark in India’s own IT and the state capital Bengaluru, and also in other parts of the country. Some of them work in the Gulf countries and add variety and spice, and they are known for their soft skills, work ethics and commitment to the job. The first rank to SSLC exams in the state this year was bagged by a girl from Sirsi, is a case study to begin with. The people from the district have left their mark in various fields and the list of success stories and achievements keeps growing year after year.

“All men and women are born equal and everyone has an equal right to life”. These words appear inspiring but in reality do not come true to the people of the large Uttara Kannada (UK) district of Karnataka.  The district is crying for attention in various development parameters and one of them is the absence of quality healthcare like a multi-specialty hospital and very few high paying jobs in the region. But the one genuine demand on everyone’s mind is the need for better medical infrastructure and the voices and concerns of the people keeps growing with each passing day. It’s hard to fathom that even in 21st century India, that people in a modern state like Karnataka, have lost their lives for want of timely treatment and quality medical care.

The district has not made progress in terms of medical infrastructure and is dependent on the neighbouring districts within and outside the state. There was an interesting photo of a road accident humorously captioned during the monsoon months and shared on #NammaUK, which read as, “drive carefully in UK district as there are no hospitals available to quickly treat the injured”. This may sound funny to people not familiar with the daily problems faced by the people throughout the year and not getting the much needed medical treatment during an emergency.

People suffering from severe health conditions, victims of road accidents or any other ailment from Karwar-Ankola regions head north to the state of Goa during medical emergencies; those from Kumta-Honnavar-Bhatkal areas head south to Manipal hospital, and those from the interior taluks and regions go to the places nearest and convenient to them. This is a daily struggle and an ordeal that the rich, poor, powerful and not so powerful people go throughout the year in seeking quality medical treatment. This causes acute stress and anxiety to the family members who take the ailing patient to a nearby hospital and do their best to save their loved and dear ones. During any medical emergency timely treatment saves lives if the patient is taken to a hospital at the earliest. There have been numerous cases when travelling long distances to a hospital during the golden hour; some of the patients do not make it alive and known to have collapsed during their journey to the hospital because of the fatigue of road travel. Time is crucial for any medical emergency, and accident victims deserve quick attention because of the nature of injuries caused and timely treatment saves lives.

To avoid trauma to both the patient and their family members from the remote regions of the district; it is important for the decision makers to have one or more than one multi-specialty hospitals at an equidistant place easily accessible by all and convenient to the different regions  of the district.  Because quality and timely medical care and treatment is no longer considered a luxury and is a basic necessity to right to life to both the rich and poor alike. The people across the district are demanding a super-specialty hospital and not asking for a sports complex or a Formula1 race track for their machines. So the elected representatives and the concerned people should respect and address the genuine demand of the people of Uttara Kannada (UK) district, by constructing a state-of-the-art multi-specialty hospital offering excellent and affordable quality medical treatment all under one roof at the earliest.

Ankola in Uttara Kannada (U.K.) District of Karnataka Finally Gets Nod For A Domestic…