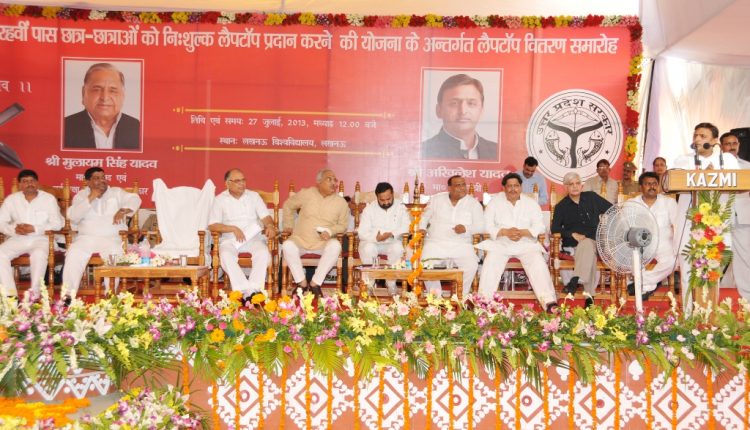 With almost a year to go for the crucial Uttar Pradesh Assembly elections, political parties have already begun the exercise of chalking out a strategy to capture power in what is seen as a major stepping stone to capture Delhi with BJP to be the first off the blocks.

One of the major factors in Uttar Pradesh is caste since according to the breakup, the forward castes account for 18-20 per cent of the population, OBCs are about 40-42 per cent, and among the upper castes, 9 per cent are Brahmins, 4-5 per cent are Rajputs, and 3-4 per cent are Vaishyas or Baniyas.

In 2017,  the BJP won 62 per cent of the upper caste votes while the mahagathbandhan got 18 per cent of the votes, and Mayawati’s Bahujan Samajwadi Party got 10 per cent.

Thus, the BJP pretty much swept the upper caste vote. Of the total Muslim votes, only 2 per cent Muslims went to the BJP, while 70 per cent voted for the mahagathbandhan (Congress and SP) and 16 per cent for the BSP.

Furthermore, in 2017, the BJP got 17 per cent of the Dalit votes. Therefore, BJP built new politics, both nationally and in UP, by getting the lower caste votes to its side, which it did not have previously.

The BJP whose campaign was spearheaded by none other then Prime Minister Narendra Modi captured 306 seats in the 403 member Assembly and along with nine belonging to the Apna Dal (S), the saffron party’s strength was 315.

However, the Covid 19 had a severe impact in Uttar Pradesh as one saw visuals of dead bodies either floating in the rivers or buried along the river banks which appeared to have shaken the ruling BJP.

What will be interesting is how the disparate political opposition  shapes up or does not shape up to meet the saffron challenge.

The impressive showing of the Samajwadi Party in the recently-concluded Panchayat elections may enthuse that party to think that it had best go on its own into the Assembly fray. So might the Congress which also notched up victories in some 61 Panchayats, thinking that the much-improved ground work done by Priyanka Gandhi Vadra as General Secretary and a new, youthful base may have brought some lost tribes back to thinking of the grand old party as a primary option.

However, the BJP appears in what it calculates having scored a major blow to the Congress by weaning Jitendra Prasada who was considered close to Gandhi scions even though he never won elections in the recent years.

Surely, it is more a symbolic win for the BJP as it continues to repose confidence on the incumbent Chief Minister Yogi Adityanath who is a staunch Hindutva practitioner and belongs to the Thakur community which wields immense clout in the State.

The BSP leader  Mayawati who continues to nurture prime ministerial ambitions appears to have suffered setbacks as several of its MLAs shifted allegiance to the Samajwadi Party.

Known to be among the best in formulating election strategies, BJP is aware of these developments and has already begun meetings at the highest level to formulate strategies knowing fully well the impact that Covid 19 has had in the state and the damage done to the party in handling this issue.

One of the major advantages for the saffron party is that the two top leaders Modi and his Home Minister Amit Shah are one of the best poll strategists among the political leaders in the country.

Though the party may have suffered setbacks in the recent Assembly elections in West Bengal, Tamil Nadu and Kerala, but, Uttar Pradesh is a state where the saffron party is bound to craft a strategy to ensure it holds on to power since it is crucial to capture Delhi.

Apart from this, one can be sure that the ruling BJP  will leave no stone unturned to topple the opposition apple carts, however these may come to be conceived. In recent years, money has come to play a stellar role in inter-party trade-offs, and the BJP has several times more of it than all the others put together.

The parties opposed to the BJP may think it wise to strike a modus vivendi between them, so as first to dislodge the “nationalists” from state power before other considerations come to prevail.

In that scenario, the exemplary performance of the Mamata-led Trinamool Congress in West Bengal could function as an inspiration, and Mamata herself may think it worthwhile to give time to events in Uttar Pradesh to achieve a like result.

What remains to be seen is how far the disaffections of the farmers, many of whom voted for the BJP the last time around, will outweigh the machinations of the BJP’s skills at engineering a fresh schism among them.

Then there is the power of bounties declared by the powers-that-be in timely fashion. Already, the prime minister has  announced some sops, raising Minimum Support Price on a few grains, and free vaccinations in state-run institutions till November. Alas, had this been done before now, many deaths may have been averted.

How far this canny politics may meet the scale of its alienation from the bulk of the populace, given the experience of the migrant workers during the first phase of the pandemic, and the unconscionable cruelty and insensitive collapse of empathy during the murderous second phase remains a question.

With an economy decimated by inflation, unbelievable price rise, epidemic scale joblessness, and the abject collapse of the health-care system, made revolting by the fudged figures about dead bodies, medicines cornered by the black-market or by nepotistic ruling elements, vaccines exported rather than ordered in time, defective ventilators bought from the PM CARES Fund (with no investigation in sight about the questionable purchase) the stunned revulsion of doctors and other medical staff, (now openly agitating under the aegis of the Indian Medical Association) at the calumnies they have had to bear on behalf of quakes in high places who declare with aplomb that no one that is yet born may ever arrest them for their misdeeds.

Lastly, if it is inevitable that the results of the elections to the Uttar Pradesh assembly will determine in consequential ways how opposition forces may or may not come to forge effective changes and strategies to meet the watershed test of the General Elections in 2024, will they agree on a face to meet the face that now rules?