On the cosy summer morning, warm golden sunrays were hitting my window, the meadow was glowing under its morning warmth and the dew was still plainly visible on the blades of grass. 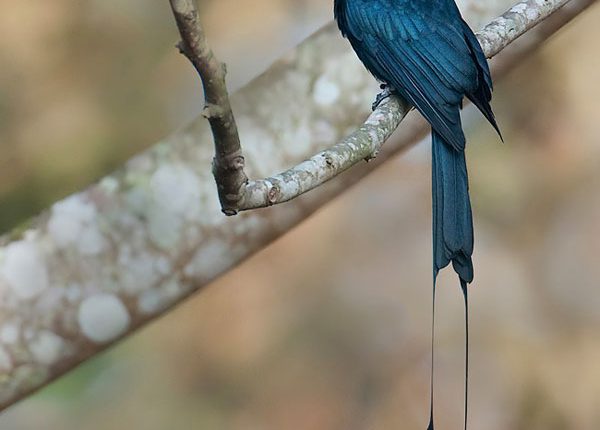 On the cosy summer morning, warm golden sunrays were hitting my window, the meadow was glowing under its morning warmth and the dew was still plainly visible on the blades of grass; I was  awaken by the unusual bird call with different loud notes, that couldn’t let me doze off again. I rolled out my blanket and walked in the direction of acoustic note to quieten my curiosity and to my disbelief I could see a black shiny racket tailed drongo sharing the perch with a serpent eagle and an emerald dove. This unusual behaviour of the birds arose my curiosity to find out what’s going on amongst the winged creatures soaring high in the sky. After studying the same, I understood that nature has millions of untold secrets that we need to understand by being in close proximity. In the case of racket tailed drongo, the secret lies in its inborn mesmerizing talent of mimicry and shrewd intelligence.

Dicrurus paradiseus is a medium-sized Asian bird which is distinctive in having elongated outer tail feathers with webbing restricted to the tips; this species extends from the western Himalayas to the eastern Himalayas and Mishmi Hills in the foothills below 4000 feet. They are found in the hills of peninsular India and the Western Ghats. They are found across the planet and continuing into the west to the islands of Borneo and Java in the east through the mainland and islands .These nerd birds can mimic approximately 35 Bird species; three mammals which includes the  langur ,elephant, deer alarm calls; two species of frogs and some insects too. This is the reason why these black birds can easily mingle with other species of birds, snatch their food, and shoo them away with alarm calls, because they communicate with   birds in their own language. Several studies on Racket-tailed Drongos in Sri Lanka by Eben Goodale and his group have shown that drongos are regular participants in mixed species flocks, and that their mimicry could potentially facilitate the formation of such flocks. They also found that alarm mimicry produced by Racket-tailed Drongos could induce a flee response or even mobbing behaviour from the species that were being mimicked. In some places they have been found to be kleptoparasitic on others in mixed-species flock, particularly laughing thrushes but they are most often involved in mutualistic relation where drongos equally participate in fetching food; as well as  commensal relations where the latter is benefited while the former is not harmed . Several observers have found the drongo associating with foraging woodpeckers and there is a report of one following a troop of macaques. Apart from these talents these birds are well known for their aggressive behaviour as well, hence many small birds stay in their rapport in order to keep themselves away from predators.

Besides these studies, Samira Agnihotri , reveals that racket tailed drongos are more intelligent than our knowledge; it is known to make communicating notes of other birds to know the location of food;  their vocal notes differ according to the different altitudes of the forests to attract different birds ranging from small tailor bird to big raptors .

The bird’s Intelligence and vocal ability is not  ignored  by  humans and they been a subject matter of study since ancient times. Since times immemorial,  the Japanese regard them as “Kalavinka”,  a preacher of Buddhist principles that means they believe that these birds with their vocal skills helped the Buddhists to spread their message; “Bhringaraja” in Sanskrit quoted as “Bhigar ravat bherav” referring to its harsh call, also known as “Brihaspati”- Godess of Speech; “Kajana” the Kannada vernacular for this bird means kari ‘black’, jana means intelligent; “Kothval” in Hindi for making alarm calls ,all crediting  to its hypnotic vocal orchestra .

The reason for this behaviour lies in the evolution, the race for survival of the fittest has led to dawn of the diversified world; biodiversity is the basis for adaptation on  earth; likewise the drongos have adopted this unique intelligence and vocal ability leading a luxurious life amidst the forest, blending with other birds and enjoying a feast every day. And all we have to do is keep peeping into the forest to know more secrets.