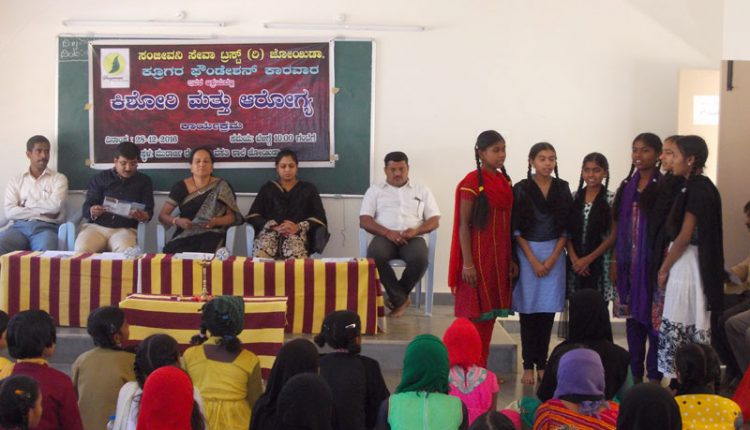 Uttara Kannada district in north Karnataka situated south of Goa and is geographically located, with the Arabian Sea on the west and nestled in the midst of the Western Ghats. Thick forests with rich flora and fauna; perennial streams and rivers add to the beauty; hamlets located in the pristine surroundings gives an ethereal feel. The warmth of the simple people with less needs and less  demanding in comparison to the people from the plains. The entire district makes an excellent perfect poster card on par with the other more popular scenic locales. The district is large in area and most of the regions are backward and are lacking in even the basic facilities.

The Sanjivani Sewa Trust, a public charitable trust a brainchild of the people living in the region was started to work for social causes. The NGO started in 2007-08, Joida, does a lot of activity to uplift and make lives easy and convenient for the people in the hilly and forested areas.  The nature of work done by the NGO comprises of : knowledge building; training and dissemination of information on issues of health; renewable energy; forests; equity; social justice and sustainable development with stakeholders such as local communities; youth; academic institutions; civil society; advocacy groups and policy makers.

The noteworthy work done by Sanjivani Seva Trust is to provide the much needed mobile health service in the remote inaccessible regions of the largest taluka in the state of Karnataka. Health services in hilly areas started in the year 2012. Joida taluka, is the 2nd largest taluka in the state and according to the 2011 census the population density is 23 people per sq.km. The population of the taluka is 52,000 and Joida has a population of 7000 people. 90% of Joida taluka is covered by forest area and the people have to walk 35-40 kilometres to reach the nearest hospital centre. Some of the most backward villages are: Anshi; Asu; Bazarkunang; Gangoda; Joida; Kateli; Nagoda; Nandigadde; Pradhani; Shingargaon and the Ulavi panchayat blocks of the taluka.

The mobile clinic visits 70 different locations in a week and covers 10 different locations every day. The bus has a team of doctors who examine the patient and give the required medications from Monday to Saturday and Sunday is the official holiday for the staff.  Such is the plight of the people that because of the lack of ORS deaths have been happening.

Monthly awareness programs and health camps are also conducted. Special focus is laid on child health and the importance of nutrition programs are highlighted. The care of the girl child is addressed and awareness created about menstrual education (menses) and teaching about health & hygiene in the schools.

Some of the other functions carried out by Sanjivani Seva Trust are:

Sanjeevani Vidya Yojana : for disseminating information on different schemes launched by the government for the backward castes and poor students.

Sanjeevani Watershed Development Abhiyaan: As Joida is rich in rainfall, yet it faces acute scarcity of drinking water. The trust supplies drinking water to villages through tankers since access to clean water is a necessity.

Creating awareness of Sanitation: In the rural forest areas use of toilets is rare, so people are being educated to make use of the government schemes to have individual toilets constructed in their homes.  Community toilets constructed in Deria village Kateli panchayat block in the taluka with active participation from the villagers. A total of six toilets have been built; three toilets each for men and women and they are being maintained and kept clean.