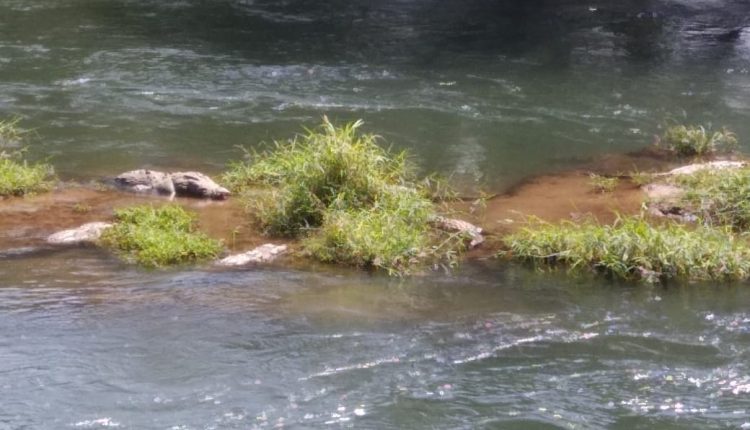 When one takes the name of Dandeli, many names come to the mind; teak wood from the forests here is popular across the globe as Dandeli teak; the place known for scenic locations in its vicinity; river Kali flowing majestically and leaving the visitor spell bound by what it offers in terms of adventure and verdant surroundings; the iconic Dandelappa temple on the banks of the river at Kerwad-Halmaddi lying on the outskirts of Dandeli between KC Circle and Haliyal. On the many islands in the river, one can see prehistoric creatures (crocodiles) basking in the sun. The visitors are in awe of them and has earned them both fear and respect equally.

The crocodile point lies in close vicinity of Dandelappa temple and one can reach the place by buying an entry ticket from the owner Mr. Shivaramappa Patil, a B’Com graduate from a reputed college in Karnataka, a  senior bespectacled person, who has aged along with the crocodiles (and its’ spoken that the reptiles recognise his family members and none of the forest department staff) and the family has been continuously residing in Dandeli for the last 70 years.

From his land on the banks of his farm one can view the magnificent reptiles taking their daily quota of sun bath and following a natural process a must for their survival. His farm offers excellent views of river Kali and the reptiles (crocodiles) basking in the sun on the many small islands formed in the river are a sight to behold where one can see raw nature at its best. The senior Patil is assisted by his son Nagaraj, and the entire family is a treasure trove of information on the reptiles and the local flora and fauna. The family members take turns sitting at the entrance and telling the visitors to be careful and requesting them not to pelt stones at the crocodiles. They go on their farm and warn some of the unruly people visiting the crocodile point with mischievous intent.

Each year 36-55 eggs laid by the crocodiles and the mongoose and the monitor lizards prey on the eggs, only eight of them hatch, and the new born crocodiles live to see the light of the day. The female crocodiles are smaller than the males, and at birth the female measures 9’’ and the males 11’’ in length respectively. The crocs at birth have 2-3 mm teeth, weigh 100-120 gms and can bite of a person’s finger as they are born deadly and the biting power of an adult crocodile can take and end the lives of aquatic and both two and four legged creatures. The crocodiles maintain balance in nature by preying on the wide varieties of fish found in the river. Some of the fish weighs 25-30 kgs and they include: roh, katla, maral and gojal a local fish found in the river. Each crocodile eats every 4-5 days and can stay hungry for days and they eat according to their size. If they don’t get their regular sun bath then they cannot digest the food they consume. Females lay eggs till the age of 40 years and the reptiles do not attack people as is the misconception and are known to attack only when disturbed. The river banks are the natural nesting sites of the crocodiles and can breed only if they are left at peace by both humans, machinery or any other disturbance.

Dandelappa a huge croc with a broken jaw is is 15 feet in length named out of reverence for the presiding deity and Dandeli is named after Dandellappa. No trip to Dandeli is complete without a visit to the crocodile point and watch the wonders of nature’s creations. If one concentrates and watches the islands, river bank and the edges of the river one is assured of seeing and counting a good number of them and is true value for money. (The author counted 22 reptiles on the small islands in the Kali river).

*One can view the Crocodiles from 8 AM-7 PM.

‘The voice of blind people hasn’t been heard’: India home to 20 per cent of world’s visually impaired