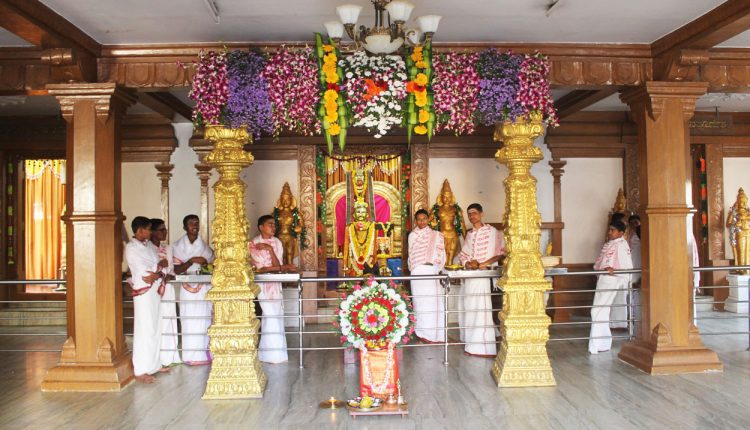 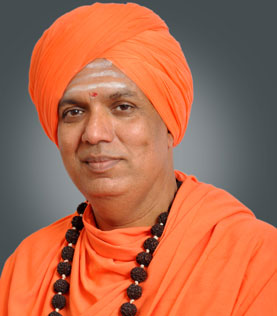 The Panchapeetha founder Sh.Renukacharya travelled to the border areas of Belagavi and spread awareness about religion, and among his followers was Shri Guru Shanteshwara to whom he imparted “Charajangam Tattva”, awareness of religion, social service, and building a healthy society which was strictly followed. The prints of Charajangam gave a lift to Veerashaiva Jyoti, and hence this land has the aroma of the divine. The 12th century was a remarkable period for Veerashaivas, and the Panchacharya clan was one of them. Shri Rambhapuri Veerasimhasana peeth branch in Hukkeri is the current math.

Shri Gurushanteshwara lived the life of a brahmachari, a great saint and blessed with infinite knowledge, a dedicated soul who travelled his entire life for the betterment of mankind and spread the word of religion. In vanaprastha ashram he built a small kutir, performed japa-tapa, linga puja, and purana pravachan. He lived his life and was finally laid to rest and his kutir became a math and this is how the Shri Guru Shanteshwara Samsthana Hiremath (SGSH) was established.

Hiremath’s History: Hukkeri math was built in the 9th century by Keladi kings and during their reign the wealth and prosperity of the region was restored. The Keladi kings had their style of sculpture and Keladi vastu shila became ‘Malenad vastushilpa. The seers Siddhabasappa and Shivabasappa had a genuine role in the math’s history they were Gurus for many dynasties. Veerashaiva theories, vachana sahitya, Veda, Agam, Upanishads and great epics like Siddhantha Shikhamani were studied and since ancient times it is known as ‘Charajangama Tattva’ and many maths were built and established.

The Newly Built Structure At Hukkeri Hiremath : The old structure was in a dilapidated state and it was demolished and in place is the new structure seen now. The math has come a long way and has been reconstructed better suited to modern times. The present pontiff is Shri.Sha.Bra. Chandrashekhar Shivavacharya Mahaswamiji, is the 59th Peethadipati, he is active, religious, spiritual, blessed with a keen sense of observation and intellect.

On entering the math on both sides of the main entrance two lion figures welcome the devotees. On the left side is the prasada nilaya; and also visible are four cement pillars and two elephant figures seen on both the sides. The main entrance door is beautifully carved in teak wood to enhance the glory. Once inside the math, one can see the idol of  Shri Gurushanteshwar in  the big  main hall and in front of it lies the Nandi bull; and on the right side of the main hall is the idol of the founder of Veerashaiva religion Jagadguru Renukacharya’s and on the left lies the idol of Aadishakti Shri Annapurna. Shri Chandrashekhar Swamiji’s Gurus, Shri Shankarlinga Shivacharya and Shri Virupaxling Shivacharya idols are placed on the right hand side.

On entering the meeting hall on the first floor of the math, it resembles the ‘Durbar Hall’ of Mysore palace and the math has been built keeping in mind the aesthetics. The hall is built majestically  and is used during the Dussehara festivities. There are chairs on opposite sides and on Vijayadashmi day, scholars, dignitaries, village heads, devotees are blessed by the pontiff. Every year a fair is organised by the math and during Dussehra, festivities are held in great grandeur and a chariot (car festival) is pulled by the devotees. Every day during the Navaratras in the night, the Shayanotsava of Shri GuruShanteshwara is performed. The idol is put in the cradle and each morning the Shree idol is awakened with suprabhat (devotional songs) and this custom is strictly followed in the math.

The Beacon Of Light On Earth: Presently the spiritual light of Hukkeri math is the 59th Pontiff Shri. Sha. Bra. Chandrashekhar Shivacharya Mahaswamiji. A devout couple Gadigeyya and Parvatidevi lived a pious life, they were satvik, followed jangam tattva and strictly practiced Panchacharya tattva and the ardent devotees were blessed with a son (Shri Chandrashekhar) born on July 20, 1970 in a  small village M. Chandargi in Ramdurg taluk of Belagavi district. During his early years, he was given mantra deeksha and was taught the Siddhanta Shikhamani shloka by his father and he would go on to receive Gurukul vidya from his patron. He completed his primary education in M. Chandargi, and his parents noticed the early signs of renouncement and sent their son to Badami Shivayoga mandir for higher studies. For Sanskrit studies he went to Hirekalmatha of Honnali village in Shivamogga district, and along with spiritual studies, he completed high school and passed SSLC in 1986, and during his early years in school, he became socially aware. For further education he reached Mysore and continued his Sanskrit studies in Maharaja college of Mysore and got his degree from JSS college of Mysore and graduated in 1990.  At Mysore University in Manasa Gangotri, he joined MA Kannada course and selected Kannada literature as his main subject and completed his 1st year studies. During the same time Hukkeri Hiremath’s 58th Pontiff Shri. Sha. Bra. Virupaksha Linga Shivacharya merged with the supreme; so Sh. Chandrashekhar Guruji had to join the math immediately and he discontinued his studies and returned to the math in the year 1992.

Love For Environment: Shri. Sha. Bra. Chandrashekhar Shivacharya Mahaswamiji service towards society has made him popular amongst the people of Hukkeri and surrounding areas, his experience of spirituality, believing in ‘Work Is Worship’, serving the cause of education, literature, education, association with societies, organisations and other maths have gained him many awards.

Contributions: The Hukkerri math pontiff is a visionary and religious person; he has worked for the expansion of education; literature; social justice; promoting yoga; professional in his approach; promotes art, and  makes huge donations to people below the poverty line and ‘Akshar Dasoha and Anna dasoha are his main mottos.